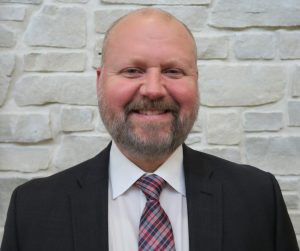 Ryan was born in Mt. Pleasant, MI. He grew up in the village of Shepherd where he graduated from Shepherd High School and went on to Central Michigan University where he obtained a Bachelor of Science degree in Sports Medicine before enrolling in Wayne State University’s Mortuary Science Program. He earned his Michigan Mortuary Science License in 2011.

Ryan worked for various other funeral homes before settling in Michigan’s beautiful Upper Peninsula, in Manistique. In September 2018 he purchased the former Messier-Broullire Funeral Homes of Manistique and Garden, renaming them Fausett Family Funeral Homes where he continues to serve the community. Ryan is a member of the Manistique Rotary Club, the Indian Lake Golf Course, and the Manistique Elks Lodge.

Ryan is married to Lindsay (Jacobs) Fausett (Jackson, MI native), is the doting father to his three beautiful daughters, Olivia, Claire, and Norah, and has a beloved family dog, Chuey. He enjoys spending his summers boating on Indian Lake, golfing, and mowing his lawn. During the long Michigan winters he enjoys time with friends snowmobiling and ice fishing. He is a dedicated Michigan State football and basketball fan and enjoys watching Detroit sporting events.