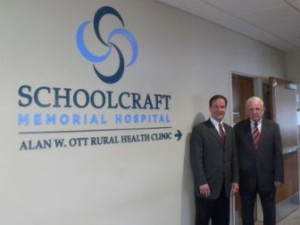 A number of years ago, the Midland, Michigan based Rollin M. Gerstacker Foundation awarded Schoolcraft Memorial Hospital with a $500,000 gift towards our Capital Campaign.

Spearheaded by Board Chairman, Don Perigo, a naming opportunity with the foundation was discussed and agreed upon, leading to the Alan W. Ott Rural Health Clinic.

So, who is Alan W. Ott? Mr. Ott was born in 1931 and raised in Manistique. While still in high school, he took a part-time job as a bookkeeper at the First National Bank of Manistique, launching a banking career that would last for more than 50 years.

In 1972 Mr. Ott was named President and Chief Executive Officer of Chemical Bank in Mid-land. He became Chairman in 1986. He also held the same positions with Chemical Financial Corp. During his tenure with the bank, he led Chemical’s steady growth, acquiring more than 17 banks across the Lower Peninsula. In 2003, the Michigan Bankers Association named Mr. Ott its Banker of the Year.

Today, Alan serves as Director Emeritus of Chemical Financial Corp., the second largest bank holding company headquartered and operating branches in Michigan with assets of nearly $6 billion.
Mr. Ott and his wife Jean, a retired school teacher are strong believers in family and community. He has served on numerous boards including Treasurer of the Elsa U. Pardee Foundation and Vice President and Treasurer of the Rollin M. Gerstacker Foundation.

June 21, 2013 at 11:00 am on the grounds of the new Schoolcraft Memorial Hospital, Mr. Ott will return “home” to be honored by his family, friends, community and colleagues from around the state, including long time friend, the Attorney General, Mr. Bill Schuette.