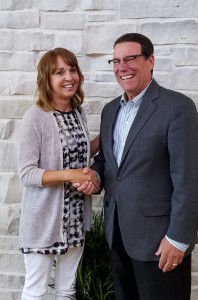 A CEO Search Committee was formed at the end of May 2016 to aid in the search of a CEO for Schoolcraft Memorial Hospital. The committee was charged to review and evaluate applications, identify candidates to screen and interview, check references, and present two or three top candidates to the SMH Board for consideration. The committee consisted of two SMH Board members: Jim Harmes and Marcia TeVelde, two providers: Dr. Kristi Kusnier and Rod Riesland, and four leadership staff members: Kent LaCroix, Scott Chartier, Kristin Peterson, and Cindy Olli. Also involved in the overall process was Kris Boyd (organization of documents/scheduling), Sara Giles (marketing/employees relations), and Scott Nagy (employee relations).

The first meeting of the CEO Search Committee was held on June 8, 2016. During this meeting, a hiring plan/process was established and CEO functions and responsibilities were reviewed including knowledge base, experience, and qualifications. A grading tool was established to use during application reviews.

The CEO Search Committee met on August 3, 2016 to discuss candidates and develop a report of identified strengths and weaknesses. Employees who had a chance to meet with the candidates were asked for any feedback. The report was submitted to the Board of Trustees for final review. On August 15th, 2016 it was announced that Robert Crumb of Skandia, MI accepted the position of Chief Executive Officer. Mr. Crumb has over 25 years of experience, including critical access hospitals, Rural Health Clinics, and strategic planning. He holds a Bachelor of Science Degree in Healthcare Administration and Masters of Science Degree in Healthcare Operations Management. His extensive experience in Northern Michigan and the Upper Peninsula region will be an asset to our local community hospital as he has great working relationships with most area CEOs and physicians throughout the region. In his spare time, he enjoys hunting, hiking, snowshoeing, kayaking, cooking and gardening and he plans to make the Manistique area his home. Robert Crumb will begin his leadership role as CEO at Schoolcraft Memorial Hospital on August 29th 2016. Don Perigo, President of the SMH Board of Trustees stated, “Our community is very fortunate to have Robert Crumb leading SMH during what appears to be a both challenging and exciting time in health care.”