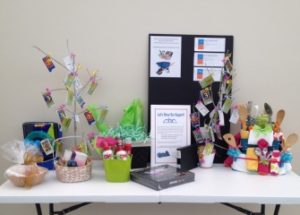 This year, SMH hosted an Auction Event to help raise money for CBC. In addition to the casual day donations that are made throughout the year, employees were asked to donate to the Auction.  Donations were made as departments, groups and even individuals.  The response was overwhelming! Auction items ranged from candy and lottery ticket trees to dinner and transportation for 4 to Chamberlains in Curtis, a Mackinac Trail wine basket, to a deck party for a group of 8 on Indian Lake.  The bid line opened on Monday March 24 and ran for one week.  Employees could log into the site to bid on the various items.  SMH is proud to announce that the Auction raised a total of $3407!!  … combined with the casual day donations, the employees of SMH will be donating a total of $4500 to CBC.